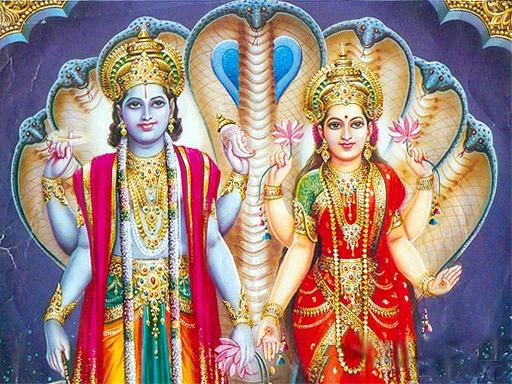 
Lakshmi is the Hindu goddess of wealth, prosperity (both material and spiritual), light, wisdom, fortune, fertility, generosity and courage; and the embodiment of beauty, grace and charm. Also is also called as Mahalakshmi,  as she is said to bring good luck, and is believed to protect Her devotees from all kinds of misery and money-related sorrows.

Representations of Lakshmi (or Shri) are found in Jain and Buddhist monuments, in addition to Hindu temples. Mahalakshmi is endowed with six auspicious and divine qualities, or Gunas, and also because She is the source of strength even to Lord Narayana. She is the consort of Vishnu and married Rama (in Her incarnation as Sita) and Krishna (as Rukmini),and Venkateshwara (as Alamelu).  In addition to Rukmini, however, she was also thought to have incarnated Radha, Krishna’s youthful lover prior to his marriage to Rukmini. In Vaishnava traditions, She is believed to be the Mother Goddess and the Shakti of Narayan.

The appearance of goddess Lakshmi is related to an ancient story. Durvasa the short-tempered sage once presented Indra, the king of the gods (devas) with agarland of flowers which would never wilt. Indra gave this garland to his elephant Airavata. Sage Durvasa saw the elephant trampling the divine garland and cursed Indra, for he had shown disrespect to the sage. The sage cursed Indra that he and all the gods would lose their power because it had made them so proud and vain. Due to the curse, the demons vanquished the gods out of the heavens.

The defeated gods then went to seek refuge to the Creator Lord Brahma who asked them to churn the ocean of milk, Ksheersagar, to obtain the nectar of immortality. The gods then went to Lord Vishnu, to seek his assistance. Lord Vishnu took the Avatar Kurma (Tortoise) and supported the Manthara Parvata (mountain) as a churning rod, while the king of the serpents, Vasuki, became the churning rope. The gods and the demons (under the leadership of the pious and wise King Bali Chakravarti) both helped each other in churning the ocean of milk.

Amongst the host of divine gifts which appeared from the ocean, goddess Lakshmi appeared and then chose Shri Vishnu as her consort, as only He had the power to control Maya (illusion). Because of this, Lakshmi is also called the daughter of the sea; since the moon also appeared from the ocean during the churning, the moon is called her brother.  Alakshmi, the goddess of misfortune, is Lakshmi’s elder sister.

According to the Vishnu Purana, Lakshmi is the daughter of Bhrigu and Khyaati and resided in Swarga, but, due to the curse of Durvasa, She left Swarga and made Ksheersagara her home. In Devi Mahatyam Lakshmi depicted as Devi in Her universal form as Shakti. The manifestation of the Devi to kill Mahishasura is formed by the effulgences of all the gods. The Goddess is described as eighteen-armed, bearing a string of beads, battle axe, mace, arrow, thunderbolt,lotus, bow, water pot, cudgel, lance, sword, shield, conch, bell, wine cup, trident, noose and the discus sudarsana. She has a complexion of coral and is seated on a lotus. She is known as Ashta Dasa Bhuja Mahalakshmi.

The Reappearance of Lakshmi after Samudra manthan and her marriage to Vishnu thereafter, remain the same. Laxmi is the power and Maya of Lord Vishnu. In some places She is seen in two forms, Bhudevi and Sridevi, both either side of Vishnu or Sri Venkateshwara. Bhudevi is the fertility form in which She is Mother Earth. Sridevi is the wealth and knowledge of Her which is seen with Narayan. Most people are mistaken that they are separate beings although they are one, Laxmi.

Mahalakshmi’s presence is also found on Lord Sri Venkateswara (at Tirumala) or Vishnu’s chest, at the heart. Lakshmi is the embodiment of love,through which devotess can readch Lord Vishnu. Lakshmi represents a more soothing, warm and approachable mother figure who willingly intervenes, acts as an advocate in the lives of devotees on His behalf. When asking Vishnu for grace or the forgiveness of sins, Hindus often approach Him through Lakshmi.

Lakshmi is the embodiment of God’s superior spiritual feminine energy, or the Param Prakriti, which purifies, empowers and uplifts the individual. Hence, she is called the Goddess of Fortune and  also as the Mother of the Universe.