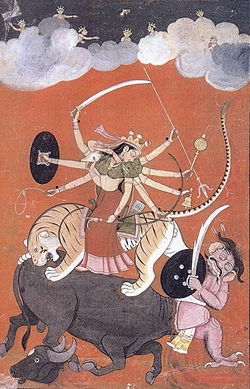 Navratri symbolically represents the victory of good over evil – Goddess Durga slaying Demon Mahishasura and Lord Rama killing Ravana. This same struggle is constantly taking place in human hearts and the nine-day Navratri Vrat gradually prepares a devotee to merge with the Brahman. Like Mahishasura, the human mind armed with ego, anger, greed, lust and envy negate the supreme force. The nine-day Navratri vrat slowly annihilates the Mahishasura in us and help us to realize us that we are part of Brahman – the supreme spirit present in all animate and inanimate.

The physical fight between Goddess Durga and the demon Mahishasura has its ups and downs. Goddess Durga fought Mahishasura and his army for nine days and nine nights. Similarly, in the fight against evil tendencies like ego, anger, lust and other animal instincts make us weak and a person too faces and downs. The destructive aspect of Mother Goddess symbolically represents the fierce commitment to win over the evil tendencies.

When a person gradually gains victory over evil tendencies, there is a void or emptiness. If left empty, the new found victory over evil tendencies will be lost soon. Therefore, this void should be filled with spiritual wealth. For this a devotee approaches Goddess Lakshmi, who provides all kinds of wealth. Goddess Lakshmi should not be merely understood as goddess of wealth or gold or money. She represents ‘Sri, Tejas, Aishwarya’ – prosperity, peace, purity and serenity.

But still the true knowledge is elusive – an individual has not attained true knowledge. This is because many feel Goddess Durga and Goddess Lakshmi is outside and not within. Goddess Durga and Goddess Lakshmi remain supernatural forces. This is ignorance. The supreme wisdom is still lacking. Goddess Saraswathi is worshipped to gain this supreme wisdom.

Finally, on the tenth day the supreme wisdom dawns in a devotee. He/She realizes that Goddess Durga, Goddess Lakshmi and Goddess Saraswathi are nothing but the supreme power manifested in different ways. Then the person moves a step ahead, and realizes the ultimate truth that he/she is nothing but Brahman and that life is a continuity.