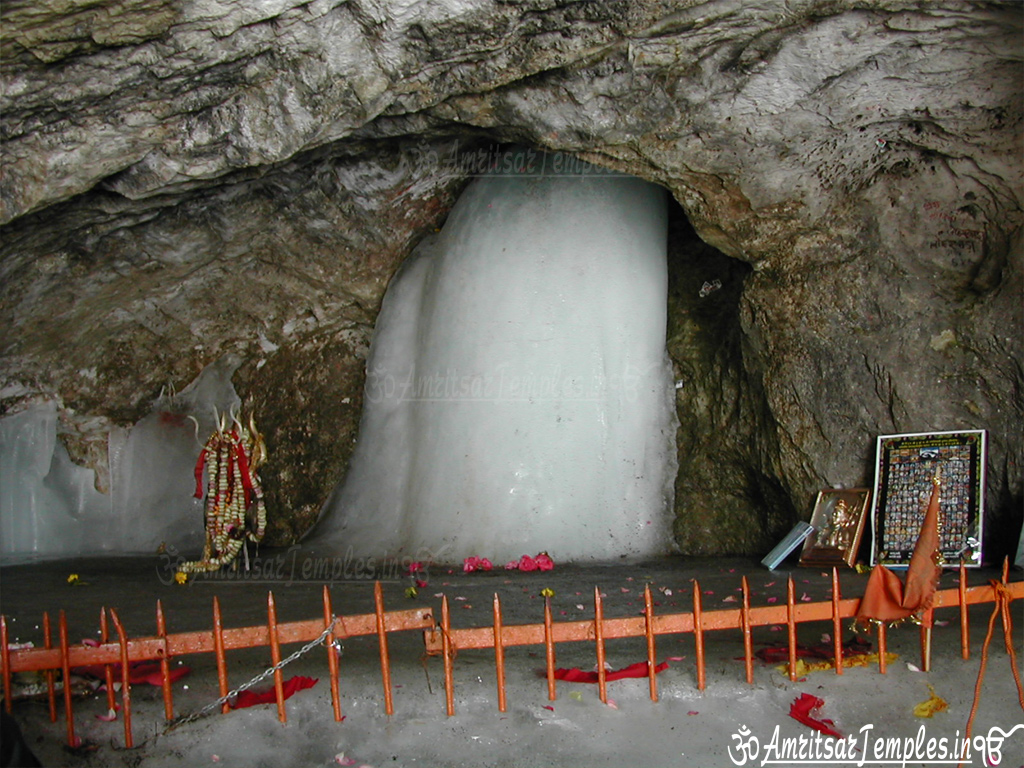 Located in the Indian state of Jammu and Kashmir and situated on Mount Amarnath, the Amarnath caves are one of the most famous shrines in Hinduism. Dedicated to the god Shiva, the shrine is said to be over 5,000 years old. The shrine forms an important part of Hinduism. The cave is surrounded by snowy mountains. The cave itself is covered with snow most time of the year except for a short period of time in summer when it is open for pilgrims.

Inside the 130 feet high, south facing Amarnath cave is the Shiva Linga, which waxes during May to August and gradually wanes thereafter. This lingam is said to grow and shrink with the phases of the moon, reaching its height during the summer festival.

According a Hindu legend, this is the cave where Shiva explained the secret of life and eternity to his divine consort Parvati. Two other ice formations represent Parvati and Shiva’s son, Ganesha.

The cave is situated at an altitude of 3,888 m (12,756 ft),about 141 km (88 mi) from Srinagar, the capital of Jammu and Kashmir. The Central Reserve Police Force, Indian Army and Indian Paramilitary Forces maintain a strong presence in the region due to security concerns. The main purpose of this pilgrimage is the sight of Lingam representing the Lord Shiva himself. According to an unproven theory the formation is an ice stalagmite which resembles the Lingam, however this theory is challenged by the fact that the substance of the lingam is not the same as stalagmites found elsewhere. Additionally, the cave being existed for few thousand years, have not filled itself from the sedimentary material. The water thawing from the roof does not fall on the lingam itself which brings in doubt the stalagmite theory. The temple is a popular yatra destination for Hindus. In 2011 it received about 634,000 people which was highest recorded number for the site. Pilgrims visit the holy site during the 45-day season around the festival of Shravani Melain July–August, coinciding with the Hindu holy month of Shraavana.

The beginning of the annual pilgrimage, called Amarnath Yatra, to the Himalayan cave shrine is marked by ‘pratham pujan’ to invoke the blessings of Shri Amarnathji.

Devotees generally take the 42 km (26 mi) pilgrimage on foot from the town of Pahalgam, about 96 km (60 mi) from Srinagar, and cover the journey in four to five days. There are two alternate routes to the temple: the longer and more traditional path from Srinagar, and the shorter route from the town of Baltal. Some devotees, particularly the elderly, also ride on horse-back to make the journey.

Baltal, Domail, Barari, Amarnath Cave. Approximately 14 km (8.7 mi). This route although being shorter, it is a more challenging route.