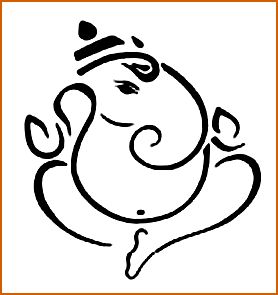 The third incarnation was of Mahodara who vanquished Mohasura, the demon of Delusion and Confusion. Once again the mouse was the mount of Ganesha. The confused nature of this tale makes it difficult to understand exactly what was going on. It seems that once Shiva was sunk in meditation for ages and showing no signs of coming out of it. Meanwhile, the gods were in need of help. Parvati therefore assumed an alluring form and wandered round his meditating spot. Shiva was brought back to normal wakeful consciousness by this act and she abandoned the alluring ‘cover’ so as to speak. This abandoned energy form became a demon in its own right over the ages and Ganesha subdued it. Shiva and Parvati are the parents of Ganesha, so the psychological implications of this tale make the head spin. Mohasur worshipped the Sun God and attained the name of Daitya Raja meaning King of the Demons. He also conquered all the three worlds… “All the gods, sages hid in caves and jungles in fear of him. There was anarchy all over. At this time Surya, Sun God advised all the gods to worship Mahodara ie, Ganesha. “All the Gods and the Sages started worshiping Mahodara. Ganesha was pleased and granted them with a boon, saying that he would slay Mohasur himself. When Shukracharya heard this, he told Mohasur to surrender in front of Mahodara. Lord Vishnu also explained to Mohasur that if he surrendered he will not be killed or destroyed.

That’s why he should accept the friendship of Mahodara. By saying this he started praising and singing the glories of Lord Lambodara. “Listening to this Mohasur became frightened and he requested Lord Vishnu to bring Mahodara giving him due honour and respect. When Lord Mahodara arrived, Mohasur greeted and welcomed him with pomp and gaiety. He sang his praises and asked for forgiveness for his evil sins. Mohasur promised the gods that he would return them their Swargalok and assured that he would be always on the path of righteousness.

He also assured them that henceforth, he would not a dare to harass the Gods and Sages. Listening to this Lord Mahodara was pleased and commanded him to go back to Pataal lok and never return again. All the Gods and the Sages were elated, They all started singing the praise of Lord Mahodara.